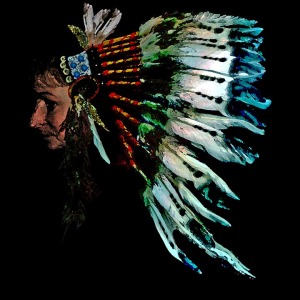 to our school sometime during the spring of 1945.

I don’t recall where I was when  I learned that President Roosevelt died, or that World War II had come to a victorious end.  The atomic bomb is just a muddled memory, but I remember the day Chief Hail Storm showed up in my Kindergarten classroom as though it were yesterday.

”The Chief” had written and illustrated one of the books Mrs. Syminger, used to teach the alphabet.  Using iconic images of American Indian kids going about their daily routine he illustrated how letters are used for words.  For example, “T” is for “Tomahawk” showed a kid dressed in a head band and loin cloth holding what looked like a hatchet. “R” is for “Rabbit” showed the same kid holding a recent kill by the ears with a caption, “Ready for Supper.”  “D” is for “Deer” had an Indian brave taking a bead on Bambi’s dad with a bow and arrow, and so on all the way to “Z is for Zoo” which was accompanied by a drawing of a monkey wearing a feather head dress; an image that frequently re-appeared in my childhood nightmares.

The announcement came about a week before the famous Indian was to make his appearance, and all our classroom activities revolved around the upcoming “pow wow,” as Mrs. Syminger called it.

Everyone else was excited but the approaching day only brought me rising fears and apprehensions.  I asked my mom if there was any chance that the previous autumn’s Scarlet Fever quarantine might re-occur any time soon.  Giving me a big hug, she promised that the doctors would make sure that nothing like that would ever happen again.

She had no way of knowing that her intended reassurance only caused me to lose all hope.  When my dad asked, “Why isn’t the boy eating?” Mom answered, “He seems worried about something.”  I was afraid to say I was worried about being scalped because I knew they would scoff and repeat some version of, “But that’s just silly,” which was the stock response to the sum of all my worries and fears during that stage of my life.

D-Day arrived.  It was deathly quiet when Chief Hail Storm entered the room in full bleached buckskins, tomahawk, lance, feathers, moccasins, fur pelts with the flattened heads still on, and a serious scowl on his war-painted face.

I recall the smell of stale milk as he raised a feathered signal coup and howled “HEY YAAAAAAHHH!”

I came back with; “BLLLEEEHCCHHH” blowing the soggy Corn Flakes my mom had forced me to eat across the front of my Roy Rogers tee shirt.

I was shuffled off to the school nurse, humiliated and sodden, but safe – out of harm’s way – where neither arrows nor tomahawks could find me.

Feel free to tell us what you thought of “Indian Attack at Charles Lindbergh Grammar School” by clicking the leave a comment link at the top of the page.